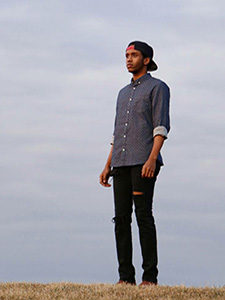 Sometimes you lose your way and you need help to get on the right path. That is what YouthBuild did for me.

Adam Nur was born in Cambridge to parents who had emigrated from Somalia and spent much of his early years traveling between homes in North Cambridge and Somalia. Due to frequent travel, Adam was in formal school intermittently. Adam finished eighth grade in Cambridge and then moved Somalia where he started working with his father. At 17, Adam decided to move back to the U.S. to finish school, without his parents. Luckily, Adam’s Uncle lived in East Cambridge, and he was able to live with him. When he first returned to Cambridge, Adam went to Cambridge Rindge and Latin School to try to enroll. He learned that he would have to start as a freshman, and probably wouldn’t be able to graduate until he was in his early 20s. To try to complete high school earlier, Adam found a GED program and enrolled full-time. However, everyone in the program was much older, and Adam didn’t feel like he fit in and wanted to find something different. The Principal of the GED program contacted JAS YouthBuild and learnd that the program was accepting students. Adam went straight to JAS YouthBuild to learn more. After arriving at the program, Adam was excited to learn that he could get a high school diploma in two years, not just a GED. He was also liked that the program offered the opportunity to earn AmeriCorps Education Awards through community service, which could help pay for college. During “mental toughness” orientation, Adam got to know a lot of his fellow students, made many friends, and learned to open up. Every morning, Adam would wake up excited to come to JAS YouthBuild, and his good attendance showed how much he liked being at the program. In 2015, Adam graduated and received his high school diploma. After graduation, JAS YouthBuild staff worked with Adam to help him research college programs, and he was very excited about a program at Syracuse University that collaborates with NASA. After learning more and visiting Syracuse, Adam decided to enroll in courses at Onondaga Community College (OCC), which has a program that allows students to automatically transfer to Syracuse University to complete a bachelor’s degree after two successful years at OCC. Now Adam lives on campus and is on the track team. He is majoring in Computer Science, and he is currently looking for summer internships as he is finishing up his first semester. “Sometimes you lose your way and you need help to get on the right path. That is what YouthBuild did for me.”