Housing and Biomedical Careers Working Together

Housing and Biomedical Careers Working Together 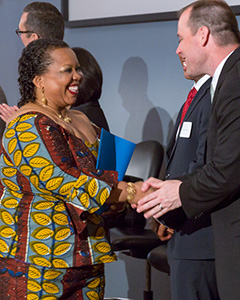 Helen Ekeh, a resident at JAS’s 402 Rindge Avenue, wanted to challenge herself and dreamed of succeeding in a career that seemed so far away. She worked as a Residential Counselor in a group home and although she liked it, ultimately she didn’t feel challenged. She left to raise her son and although the rewards of motherhood are great, she waited for the right time to move her career forward.

In September of 2014, a flyer posted at 402 for the “JAS Biomedical Careers Program” caught her attention. She took a picture of the flyer with her phone. Daily, she looked at the picture knowing that JAS Biomedical Careers Program is where she wanted to begin again. Helen’s son thought she was joking about going back to school. He said, “Mommy you never dress up”! She hopes her experience will set an example for her son, “Look at me…I can do it and you can too.”

Helen contacted Just-A-Start and her journey began with her acceptance into the program. Nothing could stop her, not even her car breaking down on the way to her first class; she took a taxi to Bunker Hill Community College. She joined students from various backgrounds, but a common goal – to make a better life. When she first met JAS staff, Helen beamed “Brenda was so warm as if she had known me all my life”. JAS staff support helped Helen relax to focus on her motivation and goals. Helen became emotional and said “I pray it will be a motivation for my son.”

Helen said the JAS program “opened her eyes” to the world around her. She thought “where have I been? I’ve been living in Cambridge for ten years and didn’t realize all the biotech companies here.” Helen graduated near the top of her class on May 19thand is working with the JAS biomedical team for job placement.

Her dreams do not stop here. Helen is already thinking of continuing her education. The decision to return to school changed her life. She had the support from not only the JAS staff, but friends and neighbors. “They helped me and believed in me.”