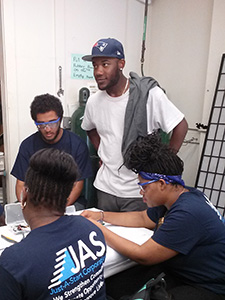 John Altidor’s parents came to Cambridge from Haiti in 1997, when he was 9 years old.

John faced challenges adjusting to school in the U.S., and he wasn’t able to do as well as he wanted academically. In eighth grade, a career counselor told John about Just-A-Start’s programs for academic support and career assistance, and he decided to check them out. One part of Career Connection that appealed to John was that while you are received academic support, you also had the opportunity to get a paying job, so he decided to enroll in the program. John also took part in the Summer Youth Enrichment Program, so he was participating in Just-A-Start programs year-round. Career Connection helped John build friendships and positive relationships and keep him out of trouble, which in turn helped him excel in school. Because of his hard work and the dedication of staff at Just-A-Start, John was awarded five college scholarships. John says that “without the hard work of Just-A-Start staff members helping me to get those scholarship applications turned in, I wouldn’t have been this successful.” After completing high school, John studied at Newbury College, and while he was in college, John started working at Just-A-Start part-time as a Vocational Counselor for Career Connection. After completing his degree, John continued to work at Just-A-Start full-time for the TeenWork program, helping high school students prepare for employment and gain work experience. Seven years later, in 2016, John was promoted to become a Case Manager for JAS YouthBuild, continuing to support youth who need help to find the right path in life.