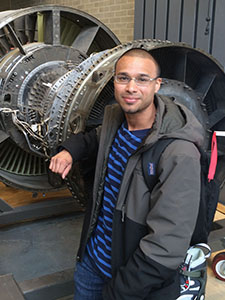 “If you were to ask me what I would change from my past, I would say nothing, because I wouldn’t be the person I am today. It put me in the position to relate and understand many of the students that come to JAS YouthBuild and show that there is a better path.” – Jorge Carcamo

Jorge Carcamo was born in Cambridge and grew up in Chelsea. In his own words, Jorge was kind of a “knucklehead” before he found JAS YouthBuild. At a young age, Jorge fell in with the wrong crowd, and experienced the consequences. He started out committing minor offenses, which eventually led to more serious crimes, and eventually time in prison. After about six months in prison, Jorge began to reflect on himself, how he had ended up there, and whether or not he wanted this to be his life. He decided to try to turn himself around. Jorge joined a program in prison designed to help develop coping skills, became a Christian, and began attending church services regularly. He was resolved to be a better person and not to end up in trouble again.

After he got out of prison, Jorge was lucky to get a job for his Uncle who owns a granite company, where he worked for nine months. However, when winter came, there was no longer work for him and he needed to find another job. Jorge also knew he needed to get an education if he wanted to get ahead, but he needed to keep earning money while he was doing it. Jorge knows Brandon Menjares, a JAS YouthBuild alum, who told him about the program. Jorge was excited about the opportunity to complete his high school education while learning work skills and earning money.

Jorge joined JAS YouthBuild and fully committed himself to the program. He enjoyed how program staff encouraged him to challenge himself to think about bigger career goals. He now sees himself on a path to help youth who may be headed in the wrong direction, like he once was. After completing his HiSET and graduating from the program, Jorge enrolled in classes at Bunker Hill Community College and began studying Human Services to work towards his career goal. At the same time, he was offered the opportunity to stay with JAS YouthBuild as a full-time AmeriCorps member, allowing him to continue to develop construction skills, earn a stipend, and earn an education award to help pay his tuition.

After serving as an AmeriCorps member for a year, Jorge was offered a full-time staff position with JAS YouthBuild as an Apprentice Construction Supervisor. He is also now in his third semester at Bunker Hill Community College. Jorge is enjoying working with youth while he is learning about psychology and youth development, which ties into his current position at JAS YouthBuild. Some future courses that are a part of his program of study will also require contact hours with clients, which he hopes to complete at JAS YouthBuild. “Jorge is an example of why YouthBuild exists. His humility, wisdom, and demeanor makes him an extremely talented teacher and role model. I simply can’t express how grateful we are to have him on our team,” states Dolores Ortiz, JAS YouthBuild Program Director.

Jorge has also found that the construction skills he has learned are useful in his personal life. He is currently saving for his wedding, so he hasn’t had money to spend on gifts for Christmas or Birthdays. For Christmas, he completed a section of his mother’s ceiling using supplies that were left behind from past home projects, and for her birthday, he installed a new door in their home.

While he knows he may still hit stumbling blocks in the future, Jorge feels that JAS YouthBuild has taught him the perseverance he needs to be successful. For example, if a future employer wants to see a CORI (Criminal Offender Record Information), he knows that he can explain his past and what he has done to improve himself. However, if they still do not want to hire him, he will not get discouraged. He will maintain a positive attitude and he will be able to find another job.