Van Spanos leaving Cambridge better than she found it

After 45 years of community building, Spanos retiring from Just-A-Start

CAMBRIDGE – For Evangeline “Van” Spanos, it has always been about building community.

Ms. Spanos, who began working at Just-A-Start in 1969 as the community organization officer for the Wellington Harrington Neighborhood Renewal Program, said helping people achieve their dreams through education, training, and employment made coming to work every day truly enjoyable.

“I think if I had to name a highlight of my career, you know, it would be two things: JAS’s YouthBuild and Biomedical Careers Programs,” she said. “It has been pretty exciting and gratifying to see the impact those two programs have had and continue to have on the community.”

Through the years, Ms. Spanos was a founding member of Cambridge’s Out of School Youth Committee, a member of Cambridge’s Adult Employment Alliance, the Governance Board of the Metropolitan School to Career Partnership, and the Reaching All Youth Statewide Steering Committee. She served on the board of Cambridge Community Services, and has been secretary and then treasurer of the Massachusetts YouthBuild Coalition since 1999.

“Van Spanos has been instrumental in helping make Just-A-Start the success it is today,” said Deborah Ruhe, executive director of the Cambridge-based non profit economic development agency. “Our success over these many years, our record of creating opportunity, strengthening community, and improving lives in Cambridge and beyond is because of the work of people like Van. She has been a pillar of this organization, a valuable resource to colleagues, and she leaves very big shoes to fill.”

There are not many areas of JAS that Ms. Spanos has not impacted during her tenure. She served as youth program director of JAS, overseeing the Summer Program and after-school youth programs. She developed a program for out of school youth that was a precursor to YouthBuild, involving youth in renovating affordable housing while preparing for the GED.

“I also established the Futures for Young Parents Program and took over administration of the TeenWork Program from Cambridge Community Services, which had established it in the early 1980’s,” she said. “I became Director of Training and Education in 1982, and continued to develop funding for and establish a number of other programs, including Biomedical Careers, YouthBuild and Career Connection which are still operating. Over these many years she has been instrumental in leveraging millions of dollars in federal and state funds to support these programs that have served hundreds of youth and adults from Cambridge and surrounding communities. During 9 months of 2013-2014 she also served as Interim Executive Director of Just-A-Start.

Ms. Spanos, who plans to travel and spend times with friends and family after her retirement in June, said the thing she will miss most in retirement is the people she worked with and the people she helped. “The people really are the best part of the job,” she said. “I’ve met so many people, made so many friends, I think that’s what I’ll miss the most.” 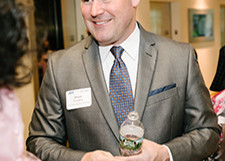 My hunger started, and eventually I got my first job, and then I haven’t really looked back.

Shawn Fitzpatrick wasn’t sure exactly what he wanted to do with his life after high school. He started working, but didn’t found anything that seemed right for him right away. When he was in his early 20s, Shawn’s mother gave him an ad for the Just-A-Start Biomedical Careers Program and it had a huge impact on the direction of his life. As Shawn says, once he got into the program “my hunger started, and eventually I got my first job, and then I haven’t really looked back.” While he was going through the program, Shawn worked full-time, which was a challenge, but he urges others to push themselves the way he did: “Go for it! Tackle that change! You are going to fall down, you will make mistakes, but it is what you learn from those mistakes and how well you get up and dust yourself off that makes you successful. By tackling that change myself, I couldn’t be any happier.” Shawn graduated from the Biomedical Careers program in 1997 and has now been working at Shire Pharmaceuticals for 17 years. In 2015, Shawn decided to join Just-A-Start’s Board of Directors, because of the positive impact that he sees the organization having on community members. Shawn thinks the Biomedical Careers Program represents something good for the community by giving people who don’t necessarily have the financial means to change their career track or find a career track an opportunity to learn a new skill and very quickly apply it to the workforce. Shawn’s sister also graduated from the Biomedical Careers Program in 2016!

Posted in: Our Voices